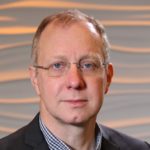 Stewart Abbot is the chief scientific officer at Adicet Bio. He holds a B.Sc. in Biological Sciences (Edinburgh), M.Sc. in Biomedical Engineering (Glasgow) and Ph.D. in Pathology (London). His academic career focused on basic and translational science initiatives in vascular biology, pharmacology and toxicology. He joined Amersham Biosciences in 2000 and developed Amersham’s and, following acquisition, General Electric’s stem cell-based drug screening capabilities. He was head of the Molecular and Cellular Biology research laboratory at GE’s Global Research Center from 2004-2007. In 2007 he joined Celgene to develop novel cell-based therapeutic candidates and subsequently development of external cellular therapy R&D collaborations and alliances. In 2015 he joined Fate Therapeutics and held roles of VP translational research and chief development officer. He joined Adicet Bio. in June 2018 and his current role oversees all research associated with genetically engineered gamma delta T cell-based therapy development.

We use cookies to ensure that we give you the best experience on our website. If you continue to use this site we will assume that you are happy with it.Ok